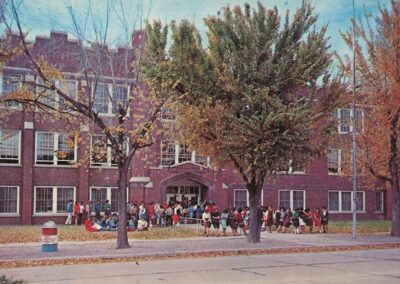 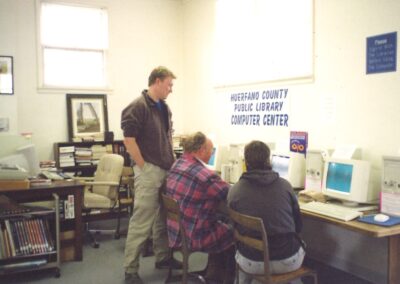 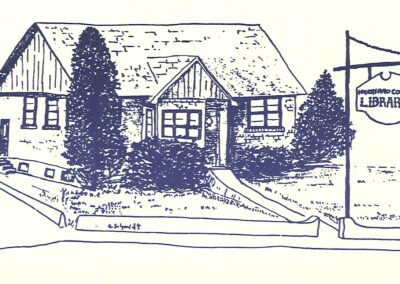 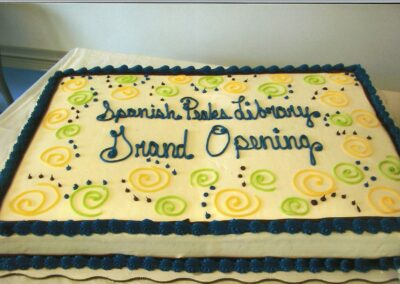 In 1906, Walsenburg’s Woman’s Club decided that the community needed a library.   Their vision started as just one book case filled with donated books, situated in the corner of a room in the Court House.

The women worked diligently to acquire more books.   According to an early account they “donated books, begged books, gave teas, sold candy and cakes, gave concerts and entertainments to save up enough nickels, dimes and dollars for a respectable book fund.”   Through the labors of these dedicated gals, “the library outgrew its little corner.”   A small Court House room was then dedicated to library use, with each Woman’s Club member volunteering time to keep the library open a few hours a week.

By 1927 the library had grown enough that it was moved into a small, remodeled house and it was open every afternoon.   The next move, again due to growth, was in 1935.   The Woman’s Civic League united with the Woman’s Club for a bigger, better library.

The most significant aspect of this effort was not the “larger, attractive Elks home,” into which the books were moved, but the change in how the library was funded.   Rather than relying solely on donations, bake sales and the good will of a few dozen women, much of the expense of maintaining a proper library was taken on by government entities – a change surely credited to good PR and lobbying activities by interested citizens.   The librarian’s salary came from the city; an assistant was paid by the Statewide Library Project; rent and utilities for the building were contributed by the county.   Funds for books continued to be raised by the Woman’s Club with their “tag day,” and by the Civic League with public card parties.   Additional revenue came from “the sale of borrowers’ cards, fines and pay books.”   At this time, the library contained about 5,000 volumes.

Thanks to Miriam Pritchard, who in her will donated the land, the present library was constructed in 1952 – a $15,000 project back then.   Six trustees were named to the board for terms of one to five years.   These first trustees were Sabino Archuleta, Mary Cowling, Alvina Leuthje , Frances Nelson, Walter Wheelock and Sarah B. Williams.   Cora Mockmore was librarian until 1966 when she was replaced by Frances King who served in through 1990.   Amy McCray took over in January 1991, and then the library’s first trained professional, Sylvia Rael Arnott , came aboard in 1992.   With a masters degree in library science and information, she has begun updating the 7,500-volume facility to improve its service to Huerfano County residents.

As more citizens become interested and involved in their library, it has great potential for positively affecting the quality of life for folks of all ages throughout Huerfano County.

The former Walsenburg Middle School was constructed in 1920 as Huerfano County High School on land provided to the City by its founder, Fred Walsen. The structure was designed by Isaac Hamilton Rapp, 1854-1933, whose firm, Rapp and Rapp, was one of the foremost architectural firms in the southwest during that period. The high school’s design is Collegiate or Military Gothic, a design created by the Rapps for the New Mexico Military Institute. Very few schools in that design remain standing today. The structure served as the community’s high school until 1975 when it became Walsenburg Middle School. The School District closed the school in May 2004, moving the students to other facilities beginning with the 2004-05 academic year.

The Spanish Peaks Library District was approved by the voters of the Huerfano School District RE-1 in 1998.   After stabilizing the operations of the Library, the Board of Trustees established an expansion fund.

During January 2005 members of the “Save Our Schools” group requested that the Library Board consider moving the library to the Walsenburg Middle School, a building they were hoping to save from planned demolition by the local school board.   Over the next several months, extensive evaluations of the building were made with the assistance of Colorado Preservation, Inc.   As the Library Board became aware of the actual costs of providing the needed space on their current site and the possibility of acquiring more space in the middle school building, they became more committed to the middle school project, as did the owners of a local business and the county economic development association. After lengthy discussions with local school and government officials, it became obvious that approval of this project would be most successful if the Library District were the lead agency and sole owner of the building.

In order to make it feasible for the Library to take on such a major project it was necessary to develop a comprehensive plan for the building. In September 2005 the Huerfano County Community Assessment SWOT Analysis was completed confirming the identified needs and recommendations of community members who had supported the reuse of the middle school building for training and workforce development. With the assistance of the Trinidad State Junior College Small Business Development Center, a plan was created for the use of the second floor based on these recommendations. The Library is committed to making this facility a total Learning Center for the community; education and life-long learning is one of the core values adopted by the Spanish Peaks Library District. The Library District committed the $450,000 in its Expansion Fund to be used to remodel the first floor of the building as an expanded, twenty-first century library.

Additional assessments of the school building have identified the need for new heating and cooling systems including insulation, new wiring and plumbing including a fire sprinkler system, and upgrading all the facilities to meet ADA standards.    Asbestos abatement will also be required. Without additional funding, the unique opportunity to create a Learning Center on the second floor will be lost. The Library District’s vision for this space would complement the functions of the Spanish Peaks Library District by delivering adult learning and training programs that focus on workforce development and life-long learning opportunities. These have been identified as key issues in Huerfano County. Many other community service agencies have expressed an interest in being housed in this building, but cannot make the economic commitment to pay for needed remodeling costs. In order to provide low-cost facilities to these agencies, it will be necessary to complete all the required upgrades so they will be able to commit their funds to join in the new Library and Learning Center. If the building can be used for these purposes it will not only revitalize the faith of local citizens in their community but also provide trained workers and an historic presence to welcome visitors to Huerfano County.

Colorado Online Libraries is made possible through grant funds from the Institute of Museum and Library Services (IMLS) administered by the Colorado State Library.
Copyright © Spanish Peaks Library District